David Kendall passed away on Sunday, August 25th 2019. He was a pioneer in Australian Theatre, particularly in Melbourne at LaMama, and was instrumental in creating drama training for actors in Adelaide, South Australia from the late 80’s. This is how I met David, and he was my acting tutor at the Centre For The Performing Arts which then was a 2 year TAFE affair. I was in the first year intake of 1986.

David created a drama course in Adelaide that was not subject to the admission criteria of universities, and thus provided an alternative to those that may not have fared well in the university environment but needed more than what the many amateur schools were providing at the time. Ironically, David was the first real intellectual that I had ever met, and my own intellectual pursuits were ignited by him in those 2 mad, exciting and ultimately life changing years at the CPA.

David was extremely passionate about acting and left an impression on me about the craft that has remained. He encouraged all of us to expand our vocabulary and to write down words we didn’t know whenever we came across them and keep a kind of dictionary. I did this and believe that because I did so at that young age that my command of a decent vocabulary has never left me.

I learned a brilliant technique of acting from David called the Laban technique (also known as "Yat") which sparked my later interests in psychology, as well as further stimulating my interest in dance and physical expression. David was the consummate teacher of this brilliant method and whenever I recall the ferocity and precision with how he taught it I am reminded how hard it would have been not to be sold on it. I am also reminded to work harder with my own artistic pursuits and not surrender until, perhaps, I can master my craft in the way that he did his.

As a lecturer he was strict, and whilst he had a sense of humor there were certain things that irritated him no end. One of my fellow students had an unfortunate habit of yawning throughout class (especially in the later afternoon sessions) and this drove him crazy.

Larry the janitor came close to extinction with his repeated interruptions at 4pm (standard knock off time for campus staff but not students) just as a student was inevitably discovering an exquisite organic moment that David was so skillfully able to draw from many of us.

My acting skills were pretty raw then and I was distracted by everything else going on in my life, so was hardly an ideal student. He tolerated my new age shenanigans at the time but tried to keep my focus on acting, steering me toward the works of Cocteau, the Australian theatre greats, and Shakespeare (our course training began with Richard III).  He encouraged my interest in Antonin Artaud and the Theatre Of Cruelty but the genre was not to be a crucial part of the curriculum of a then burgeoning small city acting course.

I asked David at some stage (in our second year?) why he chose me to be one of 20 students out of hundreds that auditioned to be accepted into the course. He replied with an honesty characteristic of him, that he did not know what I would have done had he not.

Just prior to drama school I was at a stage in my young life where still traumatized by the death of a friend a few years earlier, I found myself pursuing a career in the record industry and was disillusioned about where I was headed.

I had begun a band (The Gay Giraffes In Dubbo) and had been in a large amateur production of Marlowe’s Dr. Faustus (where tellingly I played the Bad Angel, whose final speech at the end of the play was my audition piece that secured my place at the CPA).

I felt that a regular job was just not for me, and in all honesty I cannot say how my life would have turned out had I not been selected for the CPA. It changed me and equipped me for what was ahead, very little of which (it turns out) would be as a professional actor; but so much I learned from David equipped me for so much else of what I encountered as my life unfolded.

Whilst my acting career was short lived (most memorably a controversial play about AIDS and playing a would be rapist on the then new Australia's Most Wanted series) the skills that I gained there have continued to assist me throughout my life in multiple ways. David as gatekeeper of admissions was a Guardian of the gate that -  had it not opened for me - I don't think I would be where I am now. For this I am eternally grateful.

The last time I saw David was in Adelaide sometime in the mid 90’s. I was working on my RPL submission so that my certification would be recognized as an Advanced Diploma in Theatre (Acting), which I eventually secured. Should I have decided to turn the qualification into a degree (something I had considered but have long since abandoned) this was a step towards doing so, and David again, encouraged me in this endeavor.

Farewell David. I have said prayers in the hope that your transition into the Duat is a good one, and for gates to open for you there. If these prayers are heard I can repay, perhaps, the favour you did me all those years ago! 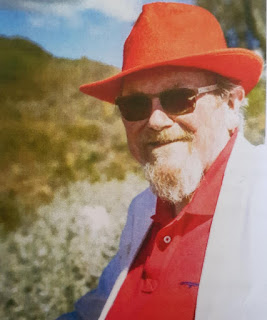 I was sad reflecting on the loss of such a great man, even though it's been since August that he passed, which is when I wrote the above post.

I regretted today not pursuing a traditional acting career, if only by virtue of the fact that I was reminded that I had been taught by such a legend. But those that know me know that I am not a straight forwards creature, and that I will do, in the end, exactly what I am going to do.

I was surprised and delighted to find that 5 of the students of the first intake of the CPA Acting course that I was part of in 1986 and 1987 were at the memorial service. Sitting with them had a strange resonance as I recalled how we sat next to one another in those two years of learning how to become actors at the feet of DK.

Even more delightful was that Neegalah and Robert Wuldi (who met at the course and are now married) opened the proceedings. Robert  with a traditional Ngarrindjeri song and a very poignant, very on point tribute that Neegalah penned. Afterwards I conversed with her, who commented that many of the sentiments she conveyed in her tribute were reflected again and again by the subsequent speakers paying tribute at the memorial.


It reinforced for me the earlier point that I made: I am also reminded to work harder with my own artistic pursuits and not surrender until, perhaps, I can master my craft in the way that David  did his. Again I am reminded how lucky I was to have had him as a teacher and mentor.

Melbourne and Australia has lost one of its most ferocious theatre pioneers. His impact can not be overstated.

To the West, David, to the West!