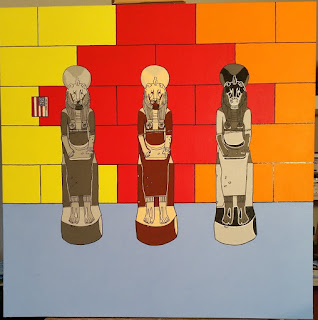 This painting is the 2nd in my series The Netjeru In America, inspired by my trip to the USA earlier this year.

I felt many Netjeru as I browsed exquisite antiquities across the country, but there was One who literally called me to Her statues each time there was a large votive statue present (usually from the reign of Amenhotep III as he made so many created!): Sekhmet. This happened at all 4 of the major museums I visited.

The painting is a reproduction of one of six statues in the Metropolitan Museum of Art in New York City.


The very first time I visited the museum in 2000 all six statues were assembled in the area where the Dendur temple is situated.

My painting had an interesting unfolding. The 3 renderings of the statue are the 3 forms of sekhem available to us. 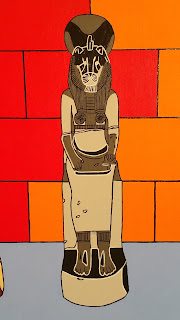 Setken
Hampton, VIC, Australia
My lifelong fascination with Ancient Egypt aka Kemet (hence Kemetic); the Netjeru (The Ancient Egyptian Gods and Goddesses) soul anatomy and Kemetic art and sculpture. I feature my paintings on here too. Other interests include bodybuilding (not indulged here), aromatherapy, art and especially sacred art in all cultures