This Has All Happened Before And This Will All Happen Again 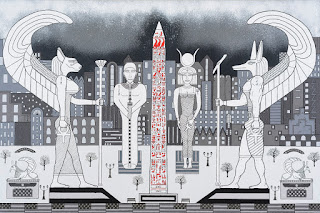 My latest painting is the first of a series created as a result of my trip to the United States early in 2015.

It features a snowscape anchored in Central Park of New York City with the so called “New York Obelisk” (also called “Cleopatra’s Needle”) at the centre.

Surrounding the obelisk are statues of 4 Netjeru: Bast, Ptah, Het-Hrt (classically Hathor), and Anpu (classically Anubis). These Netjeru are Themselves flanked either side by an outward facing Setian sphinx.

Despite having been to New York city twice prior to February of this year, I had not seen the obelisk across from the Metropolitan Museum Of Art before. Seeing it across the blanket of white with parts of snow nestled inside the bas relief glyphs haunted me. How strange that this artifact is now home in a land so far away in space and time from Ancient Kemet!

I had become intrigued by the obelisk after reading about it in Bob Brier’s “Egyptomania” last year. I found his rendering of the tale of the purchase and subsequent erection in in the 1800’s fascinating.

My painting shows the eastern face of the obelisk which is one of the better preserved sides. I have rendered the monument as it currently sits in , and used drawings by Champollion as reference. I also used reference photos that I took myself when I visited the monument in February. Evidence of palimpsests can be seen in the monument, perhaps one of the most notable being the 3 falcons at the top where the one on the far left looks dodgily rendered. (See more comments about palimpsests in the section immediately below). 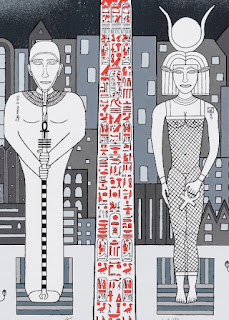 The message of the Eastern face of the obelisk
I commissioned Egyptologist Tamara Siuda to translate / transliterate the monument as well as to check my renderings of the glyphs so the painting displayed hieroglyphic accuracy and was true to the message written by the ancients. I include her translation and transliteration below along with notes.

The text reads (beginning with the column far right and top to bottom):

Horus, [Strong bull beloved of Ra]
King of Upper and Lower Egypt (Userma’atra Sotepenra)
created by (lit.born of) the gods,
Founder of the Two Lands,
Son of Ra (Meriamun Ramessu)
Glorious child,
Beloved like Aten
He shines in the horizon (as)
Lord of the Two Lands (Userma’atra Sotepenra)
Son of Ra (Meriamun Ramessu)
Appearing as Ra.**

**NOTE: honorific transposition puts the n after the R’ instead of before it as it goes in the grammar
(aX n R’, “appearing as Ra.”) This is also the aX bird (Gardiner G25), NOT the s3 bird (Gardiner G38), as drawn in the original drawing!
Artistic note from Setken: I have left the glyphs rendered as they exist in New York now, so my rendering is the s3 glyph which has occurred as a result of palimpsests (see comment above also)

Horus, [Strong bull appearing in Waset/Thebes],
Two Ladies: placed as king like Ra in the heavens,
(Son of Atum, Lord of Iunu/Heliopolis,
his father who gave birth to him, Thutmose)
(he) created for them (a) great temple
for the beauty of their flesh/bodies/limbs,
knowing that which he made**,
(they) established (his) kingship forever,
(as the) king of upper and lower Egypt,
(Menkheperra)
beloved of Atum,
the great God,
together with his Nine Gods (pesdjet/ennead),
Giving all life, stability (and) power,
like Ra, eternally.

**NOTE: or: “knowing what he would make”, the phrase is essentially timeless so it could imply foreknowledge, or past knowledge. The idea is that the gods were aware of what Thutmose did for them and so They blessed him with kingship.

The left hand side column reads:

Horus, [Strong bull Son of Khepera**]
king of Upper and Lower Egypt
(Userma’atra Sotepenra)
Golden Horus,
powerful/strong (of) years,
great in victories,
Son of Ra
(Meriamun Ramessu)
He went out from the womb
obtaining/securing the diadems of Ra
He birthed himself as (the) Sole Lord,
Lord ofthe Two Lands,
(Userma’atra Sotepenra)
Son of Ra
(Meriamun Ramessu)
appearing as Ra

There is a fourth row of glyphs on the bottom before the striping and cartouches at very base; on both left and right goes from right to left across all three rows): 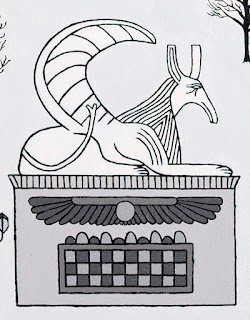 Is there a Neter of snow?
As mentioned, Ancient Egypt's two most prominent warrior pharaohs are the authors of this monument, and both had taken expeditions to the where they encountered snow. Perhaps the obelisk was communicating something to me across time when I saw those snowflakes nestling in the curves and shapes of the words that arrested me so that day?

This, as well as the notion that dialogue and messages from ancient Egypt are still being transmitted to us and have relevance today is why the words are rendered in red, as though activated and glowing.

The Neter of snow – Set – sits guard at the edges of my snowscape and His color is red.

My experience with snow this year was the first I had ever encountered in this lifetime. The bleakness of it, as well as the strangely fascinating capacity that it has to completely transform a landscape moved me.

Another aspect of my trip was to address a romantic connection began 6 years earlier in San Francisco, and upon my arrival to NY it was clear that it wasn’t to be. This did impact my trip, and perhaps the bleakness of the snowscape and the austerity of the cityscape reflects this. 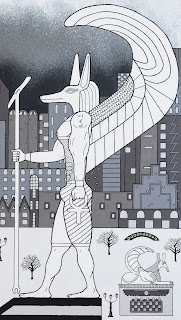 Eternal return in
The sense of the ancient being repeated in a modern context has already been mentioned and as a philosophical branch is termed “eternal recurrence”. Nietzsche is the most recent philosophical giant to broach the subject but it is not a new concept. The Ancient Egyptians themselves were a big fan of this concept and it can be found through out what we refer to as their mythology.

The title really emphasizes the eternal return aspect of the painting. It is lifted from a phrase in the recent reboot of TV series “Battlestar Galactica” where eternal recurrence is a theme heavily explored along with reference to the Ancient Greek pantheon, no less!

The red glyphs are perhaps a nod to the cylons I will concede, but this is not to underscore the deep feelings I have of the transmission of Ancient Kemet in these times, and is a fitting start to my series “The Netjeru in ”. 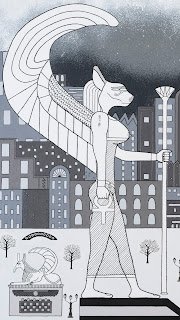 Kemetic art and today
I am attempting to keep an inherent truth in my work that is relevant to Ancient Kemet and yet still appealing for today. The 2d-ness of the painting is still somehow maintained despite the fact that depth and perspective are featured in the piece.

The 5 Netjeru featured as statues around the obelisk speaks to how I feel Kemetic spiritually is manifesting today. I see Bast and Anpu very much as heralds, and note that Their cat and dog headed forms seem to strike a chord in modern psyches.

Ptah seems to be perceived as an avatar of wisdom (Djehuti notwithstanding) and Baba Heru Ankh Ra Semahj said to me during my visit, "Don't be fooled by the B replacing the P". He speaks of the later religious deity Buddha's name sounding remarkably similar to Ptah's.

Het-Hrt in her beauty and divineness can be recognized in our obsession with beautiful women celebrities from movie starlets to pop divas most clearly in modern times and especially in .

“This Has All Happened Before And This Will All Happen Again” is an entrant in the 2016 Blake Prize for spiritual and religious art along with my previous work, “Material Immortality”.

Setken
Hampton, VIC, Australia
My lifelong fascination with Ancient Egypt aka Kemet (hence Kemetic); the Netjeru (The Ancient Egyptian Gods and Goddesses) soul anatomy and Kemetic art and sculpture. I feature my paintings on here too. Other interests include bodybuilding (not indulged here), aromatherapy, art and especially sacred art in all cultures