This is the story of my first complete work of 2015, Material Immortality.

My latest painting has taken the longest to complete of my works so far, with almost 10 months since the canvas was first prepared to when it was sealed with varnish. It has taken 3 residence changes, and gone through a name transformation.

When I was 19 or 20 I bought and read the two Her Bak volumes. The 2nd volume featured on the cover a work by Lucy Lamy that fascinated me entitled "Psychostasia". It is a Greek word that means "the weighing of souls", and featured a beautifully rendered painting of Ausar judging the deceased in the Duat. I believe that subconsciously this art has influenced Material Immortality.

The featured Netjeru
There are 8 Netjeru directly depicted in the painting; all are glyphed with the exception of Nehebukau who appears as winged and two headed at the top of the sarcophagus. Nekhbet is featured twice.
The other deities are Hehu, Khepera, Set, Sopdu, Sopdet and Sokar.  The lion lid represents multiple male lion Netjeru - Nefertum, Apademak, Maahes, Shezmu, and Hutchaiui.

Description of the artwork
The piece centres on two primary figures: The Great Netjer Khepera - Netjer of existence, transformation and change - administering transformational energy to a sarcophagus. The lion lidded sarcophagus represents the physical form of a being, and the enshrined mummiform entities depicted on the side are the other 8 "bodies" comprising the living entity. I discuss this aspect of the painting in greater detail in "Kemetic Soul Anatomy" further on.

The lid also features an effigy of The Great Goddess Nekhbet in a position of protection. Nekhbet also oversees the process from the top left corner. The image of the lion effigy protected by Nekhbet is taken directly from the Temple of Seti I in Abydos, and the sarcophagus echoes the alabaster one that this pharaoh was originally buried in, now in the John Soanes Museum in London.

The Netjer of eternity, Hehu, sits between the wings of Khepera.

The Netjeru Sopdet and Sopdu - the Sothic star energy (which is visible with the ankhs in the divine beam coming from Khepera's ankh below them) are represented with Sutekh: immortal Netjer and Great of Magick.

Sokar sits below the piece as Netjer of the underworld and representing the hidden processes of the alchemy that the painting reveals. These latter 4 Netjeru are wearing garments of contraction as the process is realized in material form.

The two plant (papyrus and lotus) emblems of Ancient Kemet are represented in the background in a fashion I began with a work from last year, Mer Wer, and again reflected in the emblem at the bottom corner of Khepera's throne.

This work is an artistic rendering of soul anatomy as expressed through Ancient Kemetic texts, and represents my current understanding of this complex subject. I had conceived a painting about Soul Anatomy some time ago, but the subject eluded me much and the concept for the painting evolved too many times for it to be rendered physically in art or intellectualized in further blog posts: I never followed up with further blogs on the matter, as the painting itself has done that.

Various researchers and Egyptologists put the soul anatomy component toll at differing figures: 5, 7 and 8 are common. I suggest 9 with my painting, and that includes the physical body (represented by the coffin lid entity)  and the "energy" sekhem (featured as one of the 8 shrine bodies).

As mentioned previously, the soul components are represented by mummiform beings inside open shrines, another inspiration form the coffin of Seti I, which also featured bright blue hieroglyphs on the then white alabaster when it was first discovered.

The soul parts from left to right top first are:
Akh
Sekhem
Ba
Sahu
Ka
Khaibit
Ab
Ren
The Khat itself is represented by the lion headed lid and is designated so just under Nekhbet's wing. A simple understanding of the meanings of each can be found in the aforementioned blog post

The Hieroglyphs
Again, I commissioned Tamara Siuda to render the texts I wanted for the painting into Ancient Kemetic, as well as to check that I had the orientation of the texts correctly on the piece, and the Netjeru's names and the soul names correct.

The texts (from top left) read:

The Great Goddess Nekhbet in her glory blesses this process 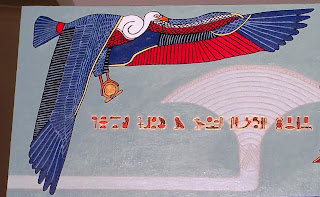 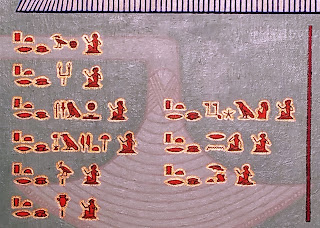 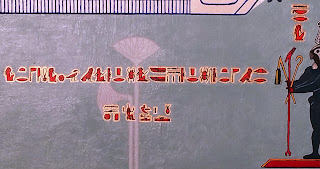 The glyphs next to each of the smaller featured Netjeru say Their names:
Sutekh, Sopdu, Sopdet, Hehu, Sokar.