The Ark Of Millions

My latest work is The Ark Of Millions. It has taken the longest to complete of all my paintings to date (almost 8 months). It is the most detailed of my work so far and features the greatest number of Netjeru I have featured in a piece to date: 15 to be exact.

The painting centres around four of the creator deities from some of the principal creation myths of Ancient Kemet: Ra, Ptah, Atum and Amon. They ride upon the golden boat that both supports, moves and contains the creation secrets of All That Is. 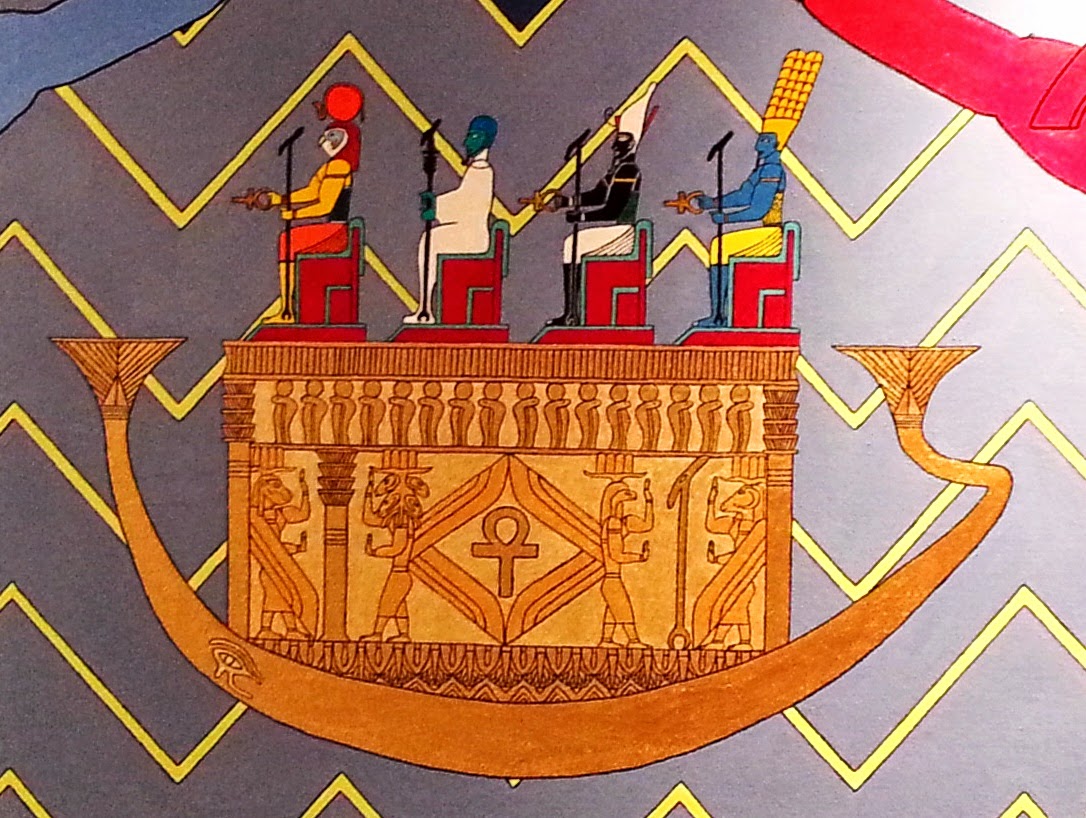 The boat features a box which is protected by the Netjeru of the winds and direction: Hutchaiui, Qebui, Shehbui, and Henkisesui, echoing the protective stance of goddesses seen on the corners of sarcophagi of 18th dynasty pharaohs and nobles. This part of the painting suggests ties to another famous ark that also possessed incredible power.

The Ark is heralded by two Netjeru in colossal form: Heru and Set. These deities appear in  in the painting as they have played a large part in my own understandings of being and becoming.

The royal goddesses of Ancient Kemet - Nekhbet and Wadjet - herald all the deities from the bottom corners of the piece.

The winged disk - Heru Behudety - crowns the entire work in a similar way to "the two ladies" at the bottom. The template that I used for this is from the Temple Of Seti I at Abydos, and I like to think that it therefore imbues the work with an echo of that great place.

The backdrop itself is a Netjer - Nun - and the hieroglyph "N" that forms His name is featured emerging from a darker primordial abyss. The color that I have used as the main background in the piece is the same base with white added for body and consistency, and in the case of the lighter colour, a lighter shade. The color is smalt hue, and a similar blue grey can be found in famous tombs of pharaohs Horemheb and Ramesses I from the 18th and 19th dynasties.  I can not explain why, but I have long associated this colour with the Duat. It is remarkably similar to the color of my childhood home. 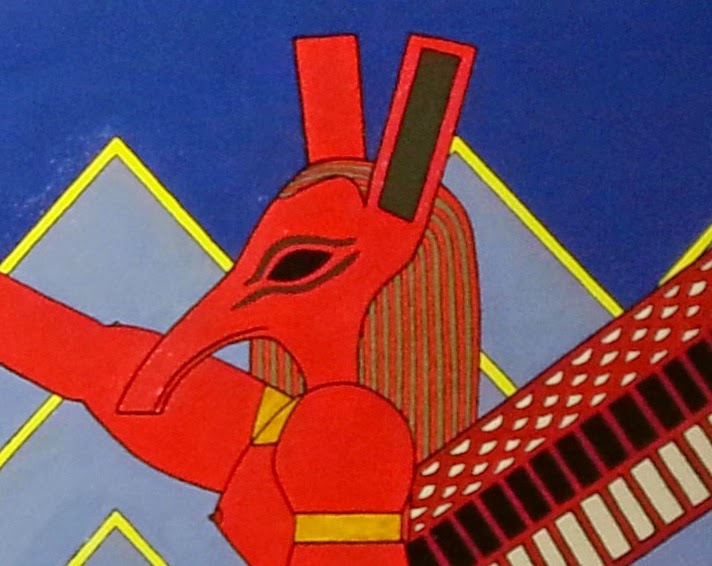 The 3 large hieroglyphs under the Ark are sky, Duat and earth, their placement under the boat signalling the Netjer's dominion over and creation of these realms. The words emerge from the Nun Himself, as the myths say all creation did. 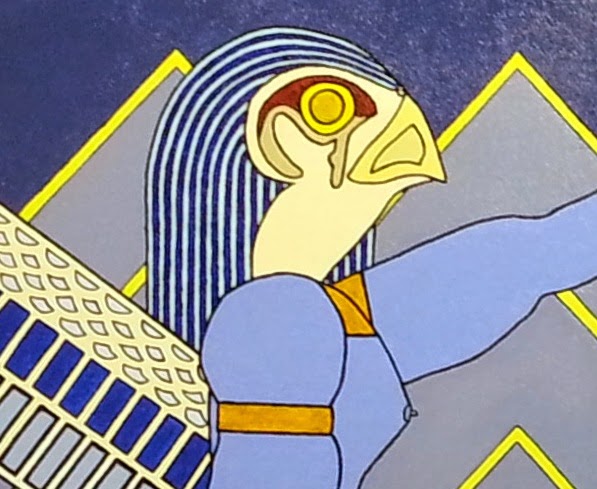 The neon lit hieroglyphs down the sides of the painting declare the title of the work, "The Ark Of Millions". Another creation Netjer is featured in these words: the god Heh, another one of the eight primordials: Amon was originally part of this ogdoad also. 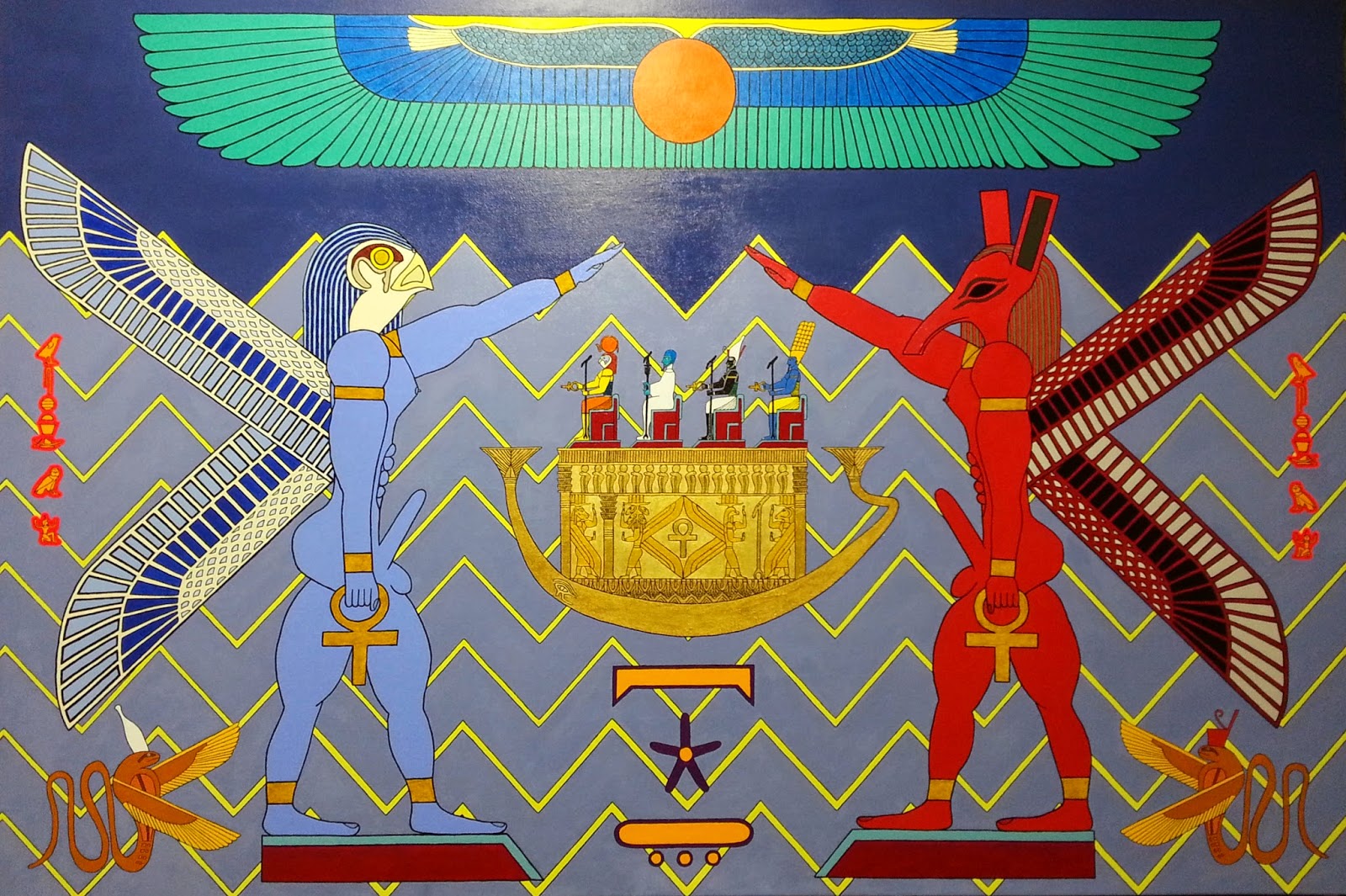