Time was an important concept to the Ancient Kemetics. Their conception of time is different to ours it seems, I wish I knew why: I do believe it is a key to understanding their unique civilisation and the role they play in our developing and evolving humanity.

Ancient built their monuments to be enduring and everlasting. The Egyptians themselves referred to their own monuments in this way. By the time of Cleopatra, the pyramids were as old to her as she is to us (by using traditional Egyptological dating of the pyramids anyways).


The Ancient Kemetics measured time by using the stars and dividing them into 12 periods, wenut, which means hour. The Goddess Wenut was rabbit headed (the hieroglyph contains a rabbit too) and there is a wonderful sculpture of her here.


They used star clocks and a simple sighting instrument to do so, and found 36 divisions of the sky – not twelve – as is used in traditional astrology and which was introduced from under post Alexander The Great rule. (Modern astrology does however divide each of the twelve traditional signs into 3 decans of 10 days though, I do note).


But they may not have experienced time as we do. The word for hour has the star and the sun disc as its determinative, and is also used in groupings referring to priests, astronomers and workers – those performing a service. Water clocks were introduced later in Egyptian history like the Zodiac. A palm frond – used for counting – is the hieroglyph for year. The glyph for millions, which came to be equated with eternity, features a Netjer with arms raised in the ka gesture and a palm frond on his head.


Like the Mayans, the Ancient Kemetics were interested in long counts of time, and there are existing “king lists” that go back beyond what we call Dynastic Egypt a very long way.


It appears that there were two conceptions of time: linear and cyclic, represented by Djet and Neheh respectively. An excellent explanation of these can be found here (with thanks to the leader of the Kemetic Orthodox faith!) 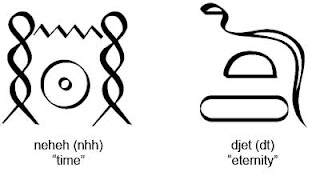 Were the Ancient Kemetics and their Netjeru masters of time? Did they inherently understand the true nature of time, as a hand in hand concept that went with their obvious understanding of Soul Anatomy? Did they know something about time that we do not?

We know that the temples and pyramids were meant to last forever, but were the tombs also meant to be discovered to yield their treasure to us in these times (literally and spiritually I mean)?