The term refers to eight Netjeru consisting of 4 each snake and frog deities that form part of the creation myth of Hermopolis (the city sacred to Djehuty). They specifically relate to the formation of matter.

I feature two expressions of the Ogdoad here: one from Wikipedia and the other from an oracle that I use called the Book Of Doors.


From Wikipedia:
The eight deities were arranged in four female-male pairs: Naunet and Nu, Amaunet and Amun, Kauket and Kuk, Hauhet and Huh. The females were associated with snakes and the males were associated with frogs. Apart from their gender, there was little to distinguish the female goddess from the male god in a pair; indeed, the names of the females are merely the female forms of the male name and vice versa. Essentially, each pair represents the female and male aspect of one of four concepts, namely the primordial waters (Naunet and Nu), air or invisibility (Amunet and Amun), darkness (Kauket and Kuk), and eternity or infinite space (Hauhet and Huh).

The Book Of Doors has the Ogdoad (Tepi Aui Un) configured differently: they express Kauket and Kuk as Kekiu and Kekiut, Hauhet and Huh as Hehu and Hehut, Naunet and Nu as Nut and Nu, and Amun and Amaunet are expressed as Kerh and Kerhet, still with a meaning of darkness and night – the oracle expresses it as “secret”. According to them, Kerh is a form of Amon. 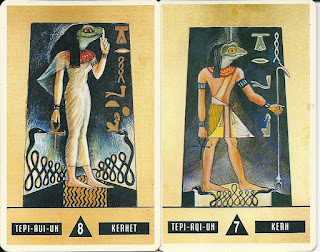 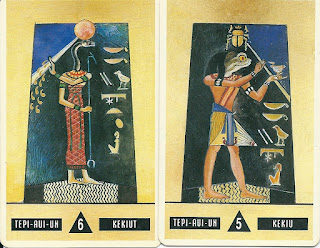 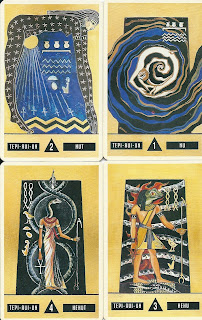 Kemetic creation myths vary from province to province and all exist alongside one another. The Kemetics did not see one creation myth as conflicting with another. All simply “were”.


Kerhet is depicted here with a frog head, signalling completion. I am not sure if this was a licence the authors have taken or if she was sometimes depicted as both snake and frog headed. I would like to know the answer to that.