Dragons and Set: Synchronicities And Connections

The concept of dragons have been coming up lately in relation to Set, and it has got my mind a-ticking.

It started with reading Don Webb’s “The Seven Faces Of Darkness” which I got for Xmas. It appears that as Ancient Egyptian culture was gradually assimilated into Greco-Roman culture, Set became associated with the god Typhon. Typhon was described as a monstrous serpent and dragon.

As Set was the slayer of Apep, I wonder how this assimilation came about? Reptilians were not normally animals associated with Set – can a dragon be considered reptilian as such?

It appears that Joan Lansberry has also considered this subject, as she mentions in a blog posting from 2004 that Set and Ra were referred to as dragons in one reference she has viewed. She writes: Both SET and the Dragon represent '' 'The spirit of the way', bringing eternal change.'' Dragon/Set is 'dark, chaotic unmanifested potential'” (see the full post here, it is really good: http://www.joanannlansberry.com/journal/pathmark/dragphnx.html )

I recently went back to to visit my family, and someone asked me about the “dragon” I had in my car. (See original post about my Set car icon here: http://setkenblog.blogspot.com/2011/07/more-fimo-creations.html )


I have become hooked on a new (to me) show called “Game Of Thrones”, and low and behold there is a dragon mythos weaving through the storyline resulting in their appearance in the final episode. Again, this only happened this week!


Finally, this month marks the 10 year anniversary where I needed to make some tough decisions about where my life was headed. It resulted in my moving to in February 2002 where I remained for 5 years.


I will never forget one of the first meditation / dream experience that I had there (I actually can not remember which it was, but it was significantly real). In the sequence, 7 dragons welcomed me to their land. It was a signal that this was where I was meant to be. It was also the setting for the biggest transformations of my life: I went there one person and came out of there another.

When my partner of the time and I moved into our apartment together there we hired a Feng Shui Master to come and check it out (i.e. to Divine it). His reading for me was: “You are a sleeping dragon. When are you going to wake up?”

In one of the many sojourns I made to with that partner, I spied a magnificent dragon bracelet in a shopping mall. We went back many months later to buy it together – a gift and investment all at once – in my last year. I left for good some months later. 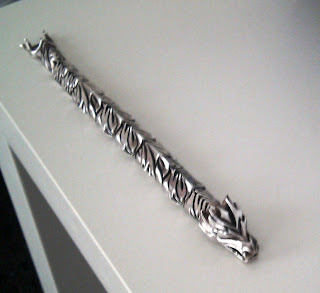 Why has Set come to be associated with this creature? Set’s principal theophany - the “Set animal” - is generally regarded as a mythical creature, although I strongly believe that it is an animal that went extinct.

Is the same true of the dragon?