Kemetic Bling: The Evolution Of My Set Pendant 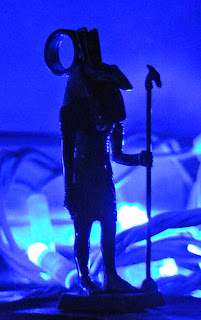 Origins: dreams and false starts
The most beautiful Kemetic object that I own is my Set pendant, which was completed recently and revealed on these pages. It is more than a piece of jewellery: it’s a talisman, a statue, and one way that I bring Kemet back into a modern world, which seems to be part of my “thing”.
I have always been attracted to tasteful Kemetic jewellery and owned various pieces over the years, many lost. These were mainly smaller objects such as rings and earrings. But a few years back I had a distinctive dream where I was wearing serious Kemetic bling – it was a large ankh on a chunky necklace. This sat in the back of my mind and inspired me to finally go ahead when I met the right craftsmen with the piece you see now. (This last sentence is actually the key to the whole thing and can not be overstated: the right craftsman)
However, that dream was not the origin of the project. Back in 2001 I made moves toward having a Netjeru pendant like this one made but it never eventuated (the jewellery guy was flaky and it was before everyone was using email making it harder to communicate ideas). You will be interested to know that at that time it was not Set but Heru that was to be the object between my pectoral cleavage! (I plan to have a Heru one made at a later date also).
Egyptian Initiation, and Anpu’s role in the project genesis
Last November I had my first trip to . It stirred and changed me in ways I was unaware of at the time, although I knew certainly that being there was having an effect. I collected some beautiful statues and jewellery there (I was still subconsciously after the Kemetic bling I mentioned from the dream years before) but did not find the Netjer pendant I was after. I did find this beautiful Udjat that I love wearing also. This journey to Ancient Kemet was somehow a new beginning.
﻿
﻿Some years ago I stayed at the Luxor Hotel in . I loved all the Egyptian stuff there, no matter how kitsch some of it was, and found some great modern interpretations of ancient stuff too.
﻿
﻿

I can not be certain but I think I bought a metal statue of Anpu and some other Netjeru here (Khonsu was one and maybe Sekhmet another). They had great little shops in there where you could buy all kinds of Egyptian treasure and I know I bought this or another similar (which were gifts for my sister) from here.

When I first met Justin – the creator of my pendant – he asked for something that was as close to what I wanted as I could find. I presented him with this statue of Anpu from my Shrine. 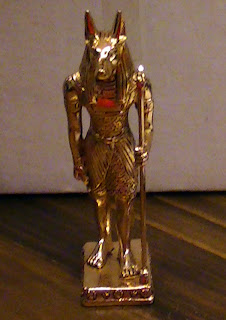 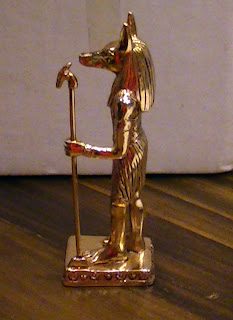 The original Anpu statue would be transformed into my Set statue!
Justin
I came across Justin at his stall at the St. Kilda pier market one weekend earlier this year when my Aunty Chris was visiting from interstate. I would never have looked along these stalls unless she was over, so it was all quite synchronous.
I was taken aback by some of the beautiful pieces he had on display and bought this Udjat ring that I wear all the time. I asked if he did commissions and we began our sms dance working out what might be possible and what could evolve.
﻿﻿
﻿﻿

The key was finding a starting point, so I supplied him the Anpu statue (see above) and outlined my vision for how the piece would look. Below is a copy of the original info that I supplied him with.
﻿﻿
﻿﻿
﻿﻿ ﻿ ﻿﻿﻿﻿
﻿

From our conversations I know that Justin was particularly impressed by the images of Set from Seti I’s temple at . He also found a statue at a museum in that was originally Set but had been changed to one representing Amun. He was particularly impressed by the grooves that lined the snout and thought this a distinguishing feature (on my pendant you can see and will agree it does add to the majesty of the piece).
﻿﻿
﻿﻿First glimpses
I got an sms from Justin one wintery morning saying that I could come and see the wax figure he had created that would become the pendant cast in silver.
We met in a café in St.Kilda and I will never forget that first glimpse I got of the grey wax figure he had created.
﻿﻿﻿
﻿﻿
﻿﻿
﻿﻿﻿

﻿﻿﻿
﻿﻿﻿
﻿﻿﻿﻿﻿﻿﻿﻿The was staff had broken off in the process of the casting, but here was my first real confirmation that magick was being created. Justin had to recreate the Anpu statue in wax also before he set about crafting Set’s head.

A mold had to be created of the original Anpu statue.

I took this shot of the master sheet that Justin brought along to show me his process of arriving at the wax sculpture. Look at the map and behold the process of a master at work!
Magick is created
It would be some months later that the silver cast of the wax rendering would be ready. Justin wanted to make sure I was happy with the work before he finished it completely.
When I arrived at his stall this is what greeted me!
﻿
﻿ 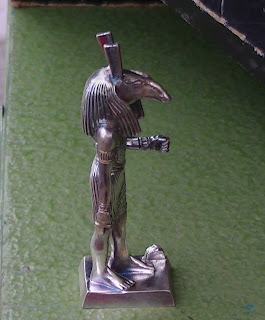 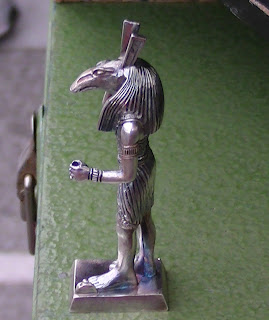 The statue was presented to me without the neck chain ring and sans was staff. These details would be added after this consultation. The silver still needed to be adjusted, although I did like the blue hue that was evident on parts of the piece.
Completion 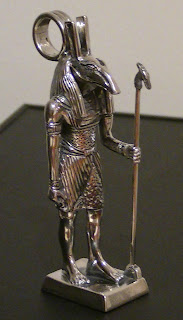 The piece was an early birthday present to myself.
It has its own energy.
People’s reactions to it vary from curiosity to great admiration. Some people go to touch it but hesitate. This is good. I don't like people touching it!
I am in the process of building a shrine / jewellery box to store it in as it is, frankly, too powerful to “leave out” full time.
I have already had some shamanic experiences with it but these I choose not to share right now.
Posted by Setken at 22:29