Tutankhamen and the Golden Age of the Pharaohs 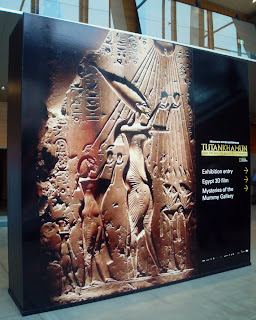 I made my way to this exhibition last Friday on my own - a friend I was going with could not make it owing to an interstate family emergency, so I was maybe a lot more focused and contemplative than I might have been otherwise.
I saw the 3D movie first (which was quite good) and made my way to the line up.
The artistic layout of the exhibit
The exhibition took place in a series of galleries and was very, very well curated. As I had been in the only months earlier, I did not think this exhibit would impress me as much as it did!
I loved the way the pieces were lit and spaced, and how the placarded info describing each object was also put up top of the cabinet in larger print. It meant we could view the objects from many sides - not just front on.
In one room, projections of the Book Of What Is In The Duat were featured in a somber lit space. The coffin of Tjuya (which I had never seem before) was the centre piece here and it truly is spectacular.
Select pieces of information displayed here and there and occasional information on plasma screens (but not too many) gave the exhibit a modern, sophisticated touch. I wish the Museum pieces were displayed with this much care!
Smenkhare
The exhibit primarily centers on the 18th dynasty King Tutankhamen and his ancestors. In one part of the exhibit they said that analysis confirmed Akhenaton as his father - and in another part that he “might be”. This and the omission of any mention of King Smenkhare at all was the only technical / info glitch that I found.

For those that may not know, Smenkhare was the pharaoh that succeeded Akhenaton and preceded Tutankhamen. I personally believe that once we understand him and his role in the Amarna King lineage we will understand the Amarna period properly.
The canopic coffinette (featured in all the display material for the exhibit) was originally made for Smenkhare. One of the statues of Tut also looked different to the other representations of the pharaoh and it is likely that these were Smenkhare’s also. (The second coffin Tut was buried in was Smenkhare’s).
This exhibit vs Gold Of the Pharaohs
I actually worked on the Gold Of The Pharaohs exhibit when it toured in in 1988! (I was working in the gift shop attached to the tour).This exhibition featured pieces centering on the 21st Dynasty. It was well put together but not like this one!
There was one very big difference: at that show, there were guards EVERYWHERE. I mean, they must have had 10 in that display area at least every day. I remember peering into the packing up hall when the exhibition ended and there were guards sitting through that process too.
There were no guards and only a handful of attendants (kids with walky talkies) at Tutankhamen and the Golden Age of the Pharaohs. And this made me wonder if some of the pieces were copies? (I have seen copies of Pharaonic objects before and they are very convincing - witness the Tutankhamen tomb display in Luxor Hotel Las Vegas).
Pieces that made an impression
There were many pieces that jumped out at me. Many of the statues of the Pharaohs and ancestors had a sense of their akhs about them, but some objects definitely had strong heka. Maybe not as strong as I have felt with some other pieces (such as some in the Metropolitan Museum of Art in ) but nevertheless “active”. This included a black resin covered wooden leonine ritual statue that had no arms, a statue of Ptah, and a winged serpent statue.
There was a beautiful empty shrine which gave me an idea for mine (I wonder which god - now missing - inhabited that shrine?), large beautiful blue ankhs (that I also had a sense had a lingering “charge”), and a gorgeous blue glass headrest that now “belonged” to King Farouk.
I also paid attention to the awesome Akhenaton head and in particular the “Shu” headdress that it sported. Akhenaton has also been found in statues and images offering “Maat” - it made me think, again, that we do not fully understand what his “religious revolution” was all about (it does not appear that he shut down all the other Netjer after all . . . )
The Shop
On exiting into the exhibition shop I was greeted with more marvels! I bought the exhibit , this Udjat, and really wanted some of the (very expensive) Alexey Vareljon jewellery on display! 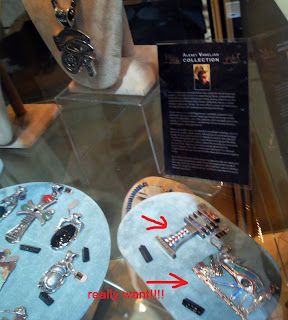 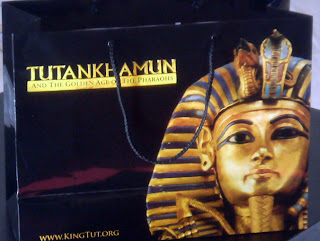 I noticed that many of the books related to the exhibition and others were all by Zahi Hawass: his name was everywhere and is also heavily featured in the . I think he has contributed a lot to Egyptology - and I think he likes to take lots of credit for it, too. It seems that he is the self appointed spokesperson for all things Ancient Egyptian now.
Conclusion
When I am in the presence of Netjer – and in the presence of these objects and things – I feel a state of calm, of “perfection” and an “at one ment”. I can not say that this is a religious feeling as I am repelled by the notion of religion, even though I appreciate it intellectually. It is I think a spiritual feeling, and a deep one at that.
I came away with a very strong desire (that is to say stronger than usual) to learn how to read hieroglyphs.
I am so grateful that this exhibition made it to my town.