Anpu Statue and my take of modern Kemetic interpretations 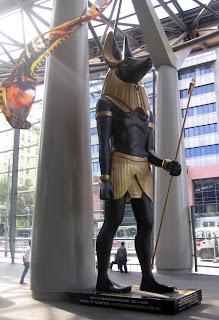 Yesterday I visited a large statue of Anpu that had been created to advertise the exhibition "Tutankhamun and the Golden Of the Pharaohs" (I am yet to see this exhibition as it has only recently opened in Australia: I noticed when I was in the Cairo Museum last year that some pieces were missing from the display cabinet and now I know where they are!) I had seen this masterpiece before as they shipped it down the Thames to a resting place somewhere along there for the same purpose. 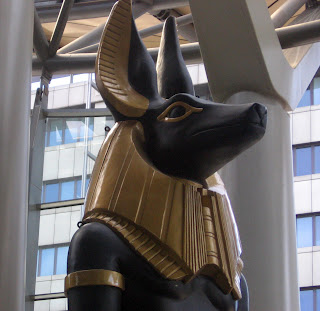 So I have already given away that I am impressed by the statue in that last paragraph: it truly is stunning and probably the first massive statue of a Netjer to be produced since Kemetic times. Even as I recall various movies that had impressive sets over the years, I am certain that nothing on this scale of a Netjer was produced. 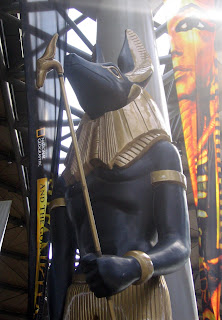 When the statues and images of Netjer were created in Ancient times they were created to specifications that did not permit "interpretation" over time - this is why for most of Kemetic history the images in tombs and temples and those expressed through sculpture remained essentially the same, with the most notable changes occuring after Alexander the Great moved in.

I think this was more than limiting an artists "licence" and had much more to do with accurately capturing the image or essence of the Netjer in the piece in question. When I see modern interpretations of Netjer, I will look for "giveaways" like the kinds of crowns, sceptres or gesture that they are portrayed with, but more so I get a feeling for wether Netjer can inhabit or live through the piece at hand. 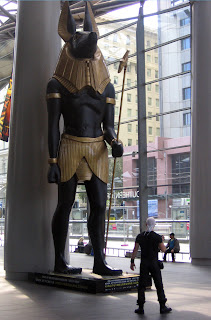 Actually in the case of this statue, I do think that Divine Inspiration was at hand as the statue does have a majesty about it which I witnessed yesterday. Do I think Anpu inhabits this image? I think a part of Him does. And I think that He "comes and goes".

If I were to change this sculpture in any way I would have the uas sceptre upright and not on a slant, and I would have an ankh in the statues' free hand. The black and gold interpretation found in so many resin reproduced images works for me and does for this statue also.

I particularly liked the detail of the head of the uas sceptre - these artists knew their stuff. 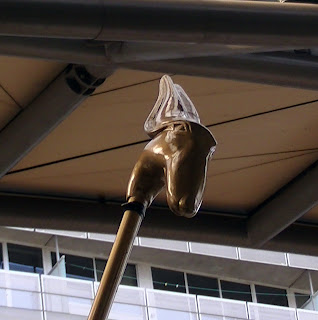 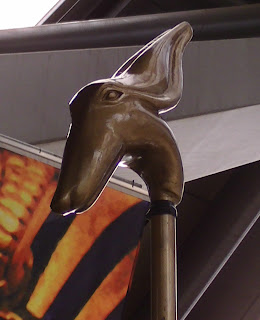